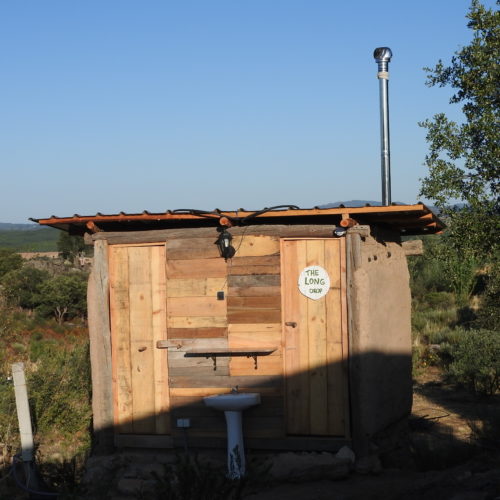 I have built a long drop dry compost toilet that links with a worm farm, the worms should move into the humanure pile, eat all the humanure while travelling back to their home and leave nice worm castings. This should take out the need to allow the humanure pile to compost for one year. Instead, I plan to harvest worm castings with worms to be added to our chicken system. It took a lot of effort to build, but it is a sustainable system that looks good and should be much less maintenance than our other composting toilets. This was completed in September 2019 and I estimate that we need three months to see how effective the system is.

Here is some information about the design and building process:

We chose a site near our community building so guests do not have to go too far for the toilet. We chose a spot at the edge of a terrace so that the humanure chamber is on the lower terrace and the access is on the higher terrace. We also chose a terrace with a sunrise view of Monsanto mountain so people can enjoy a ‘poo with a view’.

The terrace edge has an old stone wall that was made a long time ago by the Moors, so unfortunately we had to dismantle this section of the wall. We used these old stones from the wall to build the humanure chamber which is also the structure for the main building. These stones were laid by two volunteers who were on the natural building course previously (Thank you Kirsty and Sinead for your help). We used cement to bind the stones to make sure the chamber was strong. Each chamber is 1.5 metres high, 1.5 meters wide and 1.5 meters deep, about the size of a good compost pile. It was built with stone rather than wood as the humanure would be thriving with life that would decompose the wood. The stone will last a lot longer.

The bottom of the humanure chamber slopes gently downhill, so as the humanure falls at the top, it will build up and roll down the slope towards the worm farm chamber. Like any compost pile, movement will help aerate the compost, further helping decomposition.

Inside the worm chamber I built a wooden structure half way up where the waste will fall onto, this was built at an angle so the poo will pile up and roll off. This helps with further movement and also helps make it so that the sawdust doesnt have so far to fall to cover the humanure. The was made of scrap wood as I imagine it only needs to last a few months until the chamber has built up with humanure therefore not needing to last so long.

The ground in the worm chamber was lined with chicken wire so the moles and rats do not enter to eat the worms and humanure.

This is a safe place for the worms to live. This is an extension at the bottom of the long drop that sticks out so we can access it from an above latch. The access is from above so we can look in and check on the worms and close the lid. If the access was on the side like most long drops then it may be hard to close again as lots of material will come out.

The walls are made of stone and the access hatch is made of wood so we can open it.

As soon as the building was complete I set up a large worm farm in the worm chamber.  This large worm farm will allow for the worm population to increase, ready for the humanure eating job. When the humanure chamber fills up, rolls down and connects to the worm farm, the worms will be able to go and process all the humanure rapidly. I should be able to then remove worms and worm castings regularly from the worm chamber. I will do this by removing the left side of the worm farm, replacing it with a new worm farm and then a few months later I will remove the right side of the worm chamber and replace that and so on. This will give us a regular harvest of lots of worms and castings that will go into our to be finished chicken composting system linked to a food forest.

The worm farm is first made with a thick layer of bedding. Straw goes in first to soak up excess liquids, then a layer of twigs, then a thick layer of cardboard (the cardboard is ripped into little small pieces). All of the layers are made wet with a hose as worms do not like to move through dry material. The cardboard fills up to the top of the chamber. I then covered the whole thing with one of our many worm farms from our greenhouse. This had around 10kg of worm castings and 4 kg of worms. On top of the worms we put lots and lots of horse manure which is the food they are used to eating. Once the worms and food is added the cardboard is compressed down so the worm chamber does not overfill. I will need to check the temperature and humidity for the worm farm to keep them happy. Something I have to do with all my worm farms. If you want to join one of our worm composting workshops or buy worms you can get in contact with us or click here.

A wooden frame was made out of round recycled telegraph poles to support the walls, roof and floor. The front wall with the view was made with recycled windows. The back wall with the doors was made with scrap wood with two home made doors. The sidewalls and the wall to seperate the two toilets were made with wattle and daub (a natural building technique of nailing lots of branches to the frame and then covering with clay). We used mimosa from our land for the wood (wattle) and clay also from the land, for the daub. We then made roof beams with eucalyptus from our land and bought some metal sheets for the roof. The floor was made out of left over tongue and groove flooring from our house.

The toilet was made with a normal toilet seat onto a part of kitchen worktop (the part that we cut out to put in a gas stove), then went onto of a box that we made. The box was made so it exactly fits a large plastic bucket. Then we made a wooden lid to go above the seat to reduce flies entering the chamber and smells coming out. I also put on some hinges so we can access inside (hopefully I never need to). The black plastic bin sits at the top of the box so that no urine or humanure can miss the bucket, we used a big bucket so not much touches the side and of course the bottom was cut out so everything goes into the humanure chamber. The bucket is to prevent humanure from touching the wood. In our other toilet many people leave the wooden lid open. In this toilet the wooden lid leans against the door, so to get out they have to close the lid.

When we finished the toilet, I opened the toilet seat to put sawdust down and the sawdust blew up into my face. So we installed a vent. This is a 10cm stainless steel chimney that goes from the humanure chamber up through the roof and high into the sky. Now when we open the toilet seat air sucks down sawdust instead of blowing it out. The same happens for the smell.

We installed electricity from our solar panels so we have lights inside and sockets if we needed them. I had planned to put a small electric fly zapper inside the humanure chamber at the top but never got round to it before it started to get used.

We have water coming from our land into a tank and back to the toilet so people can wash their hands. The hot water is heated by 50 metres of black plastic pipe that sits on top of the roof. The water from the sink then goes through a grey water pipe to a tree.

We do not have a urine separator as wherever we have visited other places that have urine separators they have been broken, full of saw dust and very smelly. I didn’t want to make something that will break or get full of saw dust. So if we need to pee then we just go outside or to our biochar pee toilet. This is because too much urine makes the humanure smell and probably is not good for the composting worms. We have a small cup that we use to put sawdust into the chamber after we use the toilet. We have noticed that after a lot of use during an event it starts to smell. To get rid of this we added some charcoal and extra sawdust into the chamber. We have now made this part of our weekly cleaning routine to stop any smells coming. We save the empty toilet rolls for us to use for new worm bedding when we make the next worm farm.

Some photos of building the longdrop vermiculture toilet

What is missing and what could be improved: