Research » Saving an orchard at Osho Gardens in Portugal 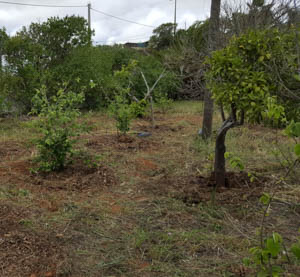 Before we buy land of our own to start Keela Yoga Farm we are traveling through Portugal and volunteering for other communities, yoga retreats and families that are having a go at the self-sufficient lifestyle. Our first stop was Osho Gardens in Algarve.

They have a new large house and 1 Hectare (2.4 Acres) of land which was overgrown with long grass. They have volunteers helping to fix up the house and gardens and in return, get to practice meditation each day.

My first task was to clear the field of long grass which then revealed a few fruit trees that were almost dead. They had at least 30 fruit trees across the property so my next task was to try and start the restoration of them.

I cleared all the weeds and grass away from around the trees with a hoe. Then the other volunteers and I put layers of mulch around the tree to build the soil. We started with compost of some sort that they had there, then put a layer of grass and leaves from nearby trees in order to feed the bacteria. On top we covered the area with a thick layer of wood chips that will eventually feed the fungi and therefore help to feed the fruit trees. The wood chip will also keeps weeds away and holds moisture in the ground. Doing this for 30 trees is a big task. There was a variety of small fruit trees and some larger fig and olive trees. There were even many olive trees which had to be pruned with a chainsaw.

Once this was done the next stage was to plant guilds around the trees to turn what is a mixed orchard into a food forest. A food forest is where we try to replicate the natural layers of plants that would usually be found in a forest which consists of canopy trees, small shrubs, bushes, vegetation, herbs, ground cover, vines and legumes. In this case, the canopy layer will be the fruit trees or shrubs such as the pomegranate tree. I have left plans with Osho as to what they could plant around each tree to add more biodiversity.

Each fruit tree is susceptible to different pests, so it is advised to plant other plants around the trees that repel those pests, such as Nostalgems to repel aphids. Alternatively, plants such as Fennel can be added to a guild to attract predator insects for pest control. We should plant ground cover such as cucumber or melon that both attract bees to help pollinate the bee pollinated fruit trees and also keep weeds away, build soil and provide more food. Some herbs can be planted to attract more bees such as thyme, or flowers such as lavender. We can also include plants that require some shade that can be planted on the north side of the fruit trees, such as aloe vera and ginger. A guild is when multiple plants are grouped together around a tree which make up a food forest.

To build the soil, layers of organic compost (microorganisms and minerals), green material (nitrogen) and brown material (carbon) should be layered each year. However to make it both easier for us and more natural, we should make or grow these materials near by. Each guild should be growing the greens and browns that are needed by a method called ‘chop and drop’.

As well as building guilds, some earthworks should be done to hold water and sink it in the land rather than allowing it to run off and be wasted.

2 thoughts on “Saving an orchard at Osho Gardens in Portugal”