As we change our lives from the busy city life in Singapore to a quieter life on Keela Yoga Farm, we decided to go on a full body detox at Orion Healing in Thailand during our six months research trip. 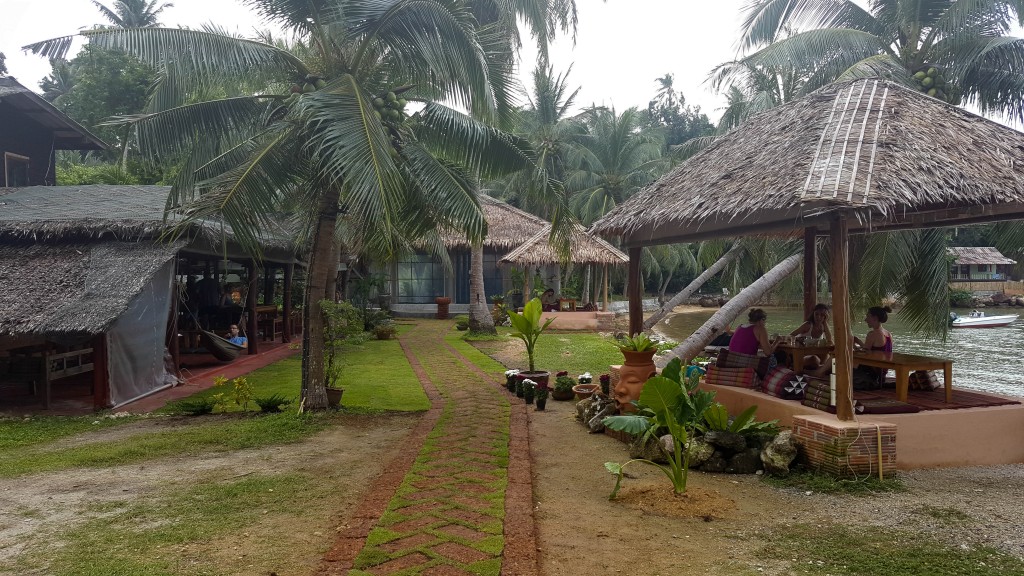 This will be the first of many research trips before we start the farm in 2016. Orion Healing is in the Sri Thanu area of Koh Phangan. I call it ‘The yoga village’ because within close proximity are three large yoga schools, lots of small independent yoga classes, and many healthy restaurants that have raw, gluten free, vegan and sugar free menus. There are also many types of healers here from Peruvian Shamans, Reiki masters, EFT practitioners, and crystal healers. All of these places are run by a mix of locals and travelling yogis who work here in the seasons or for shorter periods which makes for such a wonderful little community. I think this is an area that anyone into yoga, spirituality or health should come, rent a house for a month and volunteer somewhere. It is believed that the island is sitting on a bed of quartz crystals which I believe is what has drawn so many energetic people to this place.

According to many health practitioners, the gut is the source of most chronic health conditions from arthritis and constipation to anxiety, and the root cause is the food we eat. As we are moving to a healthier more alkaline diet with less animal products and sugar we certainly feel much healthier. A full fasting detox with daily colon cleaning (colemas) will rid the body of most of the toxins, parasites and food that builds up in the folds of the intestines and should further prevent health problems. We are far too used to letting health problems develop and spiral out of control, and then relying on pharmaceutical companies to make us feel better whilst never actually getting rid of the root cause of ill-health. We want to prevent getting the health problems in the first place.

The detox started with a two day pre-cleanse which consisted of two healthy raw food meals, a coconut, some detox supplements and two liver cleanse juices each day. This could be considered a very healthy diet to be followed all year round that would stop any further toxin build up, and is proven to prevent most chronic disease. Kimberly was suffering with migraines due to not having coffee, and from doing some research online, the chemical makeup of the brain changes for regular coffee drinkers which makes it hard for them to stop drinking for 4 days in a row. We had started a semi pre-cleanse a couple of days early as we had heard that it would help make the detox easier. Usually, Kimberly will just have a coffee after three days due to the intense migraines, but I was very impressed at her pushing through until the body got used to having no caffeine in the system. I was just quite hungry a lot of the time but tried to keep myself busy by talking to people and writing blogs.

After the pre-cleanse was the epic seven day fasting detox. This consisted of drinking  bentonite clay and psyllium husk five times a day which absorbed all the toxins from hard to reach areas in the gut. It also made us feel full so we weren’t hungry all the time. We took various supplements throughout the day that were mostly for cleansing the liver and gut. Twice per day we were to have a colema. A colema is the process of thoroughly removing pounds of impacted waste matters accumulated in the colon by pumping water into the colon, gently using regulated pressure or simply gravity. The colemas could be supplemented with coffee, apple cider vinegar or garlic, each having their own therapeutic properties for the cleanse. Every evening we were treated to a herbal tea and vegetable broth. For us, this was luxury.

Some days we felt good, some days were really bad. Apparently it is normal to feel bad at times as your cells are releasing all the toxins, and injuries and illnesses are healing themselves. Toxins are released through the bowels when we do the colema, through the skin when we sweat, as we breath and through the bladder. There is also an aromatherapy sauna at the centre which I used a couple of times but I generally felt quite dizzy after using it. Every morning I woke up quickly, alert and ready to go. I was surprised at how I was able to not eat for 7 days and I didn’t get too hungry at all due to the psyllium husk. However it wasn’t until the post-cleanse that I started feeling absolutely amazing.

After the fasting we stayed on for two more days for the post-detox, where we took daily probiotics and ate raw fruit and salads.

After 11 days you are expected to keep eating healthily for a week or so and should only introduce unhealthy or acidic food over time if at all, such as food cooked in oil, sugar or animal products.

Over the 11 days we have read many books about the the digestive system, nutrition and detoxing and we hope that this knowledge and experience will serve us well when running Keela Yoga Farm. A couple of tips we got from the Naturopath at Orion really made sense. These were that we should try and eat our daily fruit intake first thing in the morning, as fruit is high in fiber and fiber can’t be digested. It washes through the body and takes toxins out with it. So it is best to do this after not eating all night. She also recommended not mixing fruits with nuts, dairy or anything else. This reconfirmed what we were told in India, which is not to mix fruits with vegetables or other foods. So no fruit in smoothies, desserts or at lunch time as fruit doesn’t digest the same way as other food. I will write another blog on food combinations at a later date. Although the detox was challenging, especially over the Christmas period, it was a worthwhile experience which we both gained a lot from.

Overall, it was a fantastic learning experience for us both and for our future.

One thought on “Detoxing at Orion Healing”